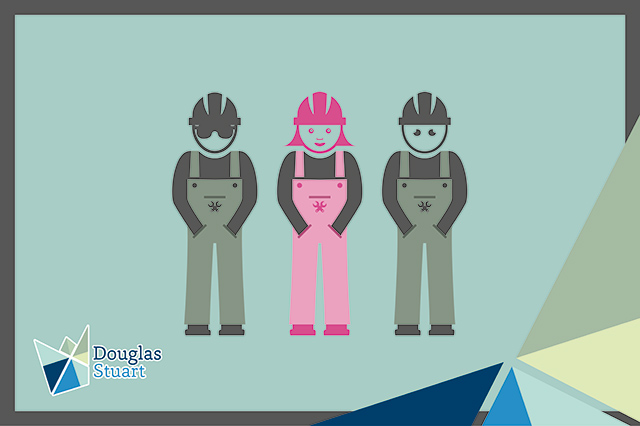 Does my daughter need pink Lego?

I don’t think so. But the marketing team at Lego, the merchandising teams in the stores it’s sold at, and not least my daughter, for whom it is designed to appeal, are doing their best to persuade me that pink bricks are for girls. Even though I’ve got boxes of the red, blue, green and white blocks passed down by my older sons, and despite the fact that, as far as I can see, Lego is inherently gender neutral; pink apparently makes building and construction good for girls.

Why is that? What makes construction, and for that matter, engineering, transport and technical design, stuff that boys do? Because, if we look at statistics across industries that are supported by the study of STEM subjects, that’s what they are – jobs for the boys.

In engineering, only 9% of the engineering workforce is female and only 6% of registered engineers and technicians (i.e. CEng, IEng, EngTech) are women. The UK has lowest percentage of female engineering professionals in Europe. It’s not much better for logistics – nearly 1.5m people work in transport and logistics in the UK, but less than a quarter of these employees are female, according to the UK Commission for Employment and Skills (UKCES). These low figures continue for women in construction, who according to the office for national statistics, make up just 11% of the industry.

The first step is to acknowledge that this is a problem, which by and large, industry has done. From industries as diverse as energy, infrastructure and supply chain, there is an immediate skills shortage that needs to be addressed, and fishing from only one half of the available talent pool isn’t going to solve that problem imminently. Skills shortage aside, every business benefits from a diverse workforce, even in construction, which perhaps suffers more barriers to entry than most.

“There is no reason why the construction industry should be any different from other sectors in terms of equality and diversity. Women working in construction have an absolute right to be treated equally to their male colleagues and both unions and employers need to work far harder to ensure that occurs.” –

But the issue of increasing female representation in jobs and sectors that have traditionally been male dominated, by no means, begins and ends with business. It starts with how we parent, and dare I say it, with pink Lego; it gathers pace through education if stereo types go unchallenged, and it’s compounded by a lack of visibility in industry.

The good news is that recent statistics from the Department of Education show that there has been an uptake in girls taking STEM subjects, and that when they do; they are more likely to achieve higher grades, comparatively to boys. However, there is still a lack of information in schools and career advice, about how these STEM subjects can translate into future jobs. In a 2014 survey of 2000 young professionals by City & Guilds, they found that men and women receive completely different careers advice at school. The top 3 career choices recommended to girls were nursing, teaching and medical. For boys it was IT, engineering and finance.

With all the bad news, it can be easy to forget that there are some brilliant, positive initiatives out there, encouraging women to get into engineering, logistics, infrastructure and technology. Not least, the women already in those jobs, demonstrating to all of us, that jobs don’t have a gender bias, only people do.

We believe that one of the best ways to promote gender parity in industries that are male dominated, is to raise the profile of the women already working in them. As part of a series of interviews with women in energy, infrastructure and supply chain we will be doing exactly that. We’ve heard some inspiring stories from successful women already working in the sector and we’ll be sharing them with you; their diverse careers and what they love about their jobs. Take a look at our regular ‘Women in Energy, Infrastructure and Supply Chain’ feature to read their stories.